Do the British (still) care about phone hacking?

The Leveson Inquiry into the “culture, practice, and ethics of the press” and motivated by the phone-hacking scandal that has rocked the UK media world in general and News International in particular is now well under way.

A large number of important people in and around the UK media industry clearly, and rightly, care deeply about the phone hacking scandal, what it tells us about (parts of) the news media, and what the fall-out will be/what the ramifications and consequences should be.

But does the British public care about the whole thing? Yes and no.

First the “no”—back in July, I used Google Trends to map searches for “phone hacking” versus “David Beckham” (my random choice of baseline celebrity). The data suggested a relatively high level of interest peaking in July around the Guardian’s revelation that News of the World had hacked the missing and murdered girl Milly Dowler’s voice mail. Now, in November, despite the riveting and ongoing unraveling of ever more instances of questionable, often immoral, and sometimes illegal, behavior, the same crude metric suggests interest in phone hacking has faded–as shown below.

Does this mean the whole thing will go away? That we will be back to business as usual in no time? Hopefully not—many people are working hard to make sure that this opportunity to improve the standards of the British media is seized.

Doing so should not be about politicians getting back at the press, hemming it in with needless regulation, or about prudish disdain for the tabloid press. It should be about strengthening the press itself. It should be about establishing a framework that will help British journalism regain the confidence of the British people.

Addressing this crisis of confidence is in the interest of those in the media themselves—and it leads me to the “yes” to the question of whether the British public cares about the phone hacking scandal. Most people do not seem to follow the twists and turns of the case, online or on other media. But many seem to have reacted in a more basic way to the revelations—which more and more evidence suggests has had direct consequences for people’s trust in the media. For a long time, people in the UK have had comparatively low levels of trust in the press, relative to other European countries (see for example Eurobarometer survey evidence–see page 83 of this rather large PDF file). This has only grown worse this year, according to YouGov.

Overtly cumbersome, intrusive, or cumbersome regulation of the media is one threat to the freedom of the press and its ability to serve democracy. But a precondition for this same press to make much of a contribution to the rambunctious running of popular government is that the population has at least some confidence in journalists and their work.

That confidence is low in the UK, the phone hacking scandal has further undermined it, and journalists and media people need win it back—or they will risk commercial ruin and democratic irrelevance. Some form of credible regulation (self or otherwise) and enforceable codes of professional conduct may be a necessary part of that. Oh, and then it also helps to abstain from flaunting the laws of the land in the pursuit of private profit…

How much do the Brits care about the phone hacking scandal?

How much do the Brits care about the phone hacking scandal? Not the Brits at the Guardian, or the Brits at the BBC, or for that matter the various Brits who are quoted in news media all over the world by journalists enthralled by the biggest media scandal in years.

No—how much does the broader British population care about the phone hacking scandal?

At the moment, they seem to care rather a lot—if you go by Google Trends’ mapping of search terms; they care about “phone hacking” as much as they do about “David Beckham”, my random choice of a baseline celebrity. 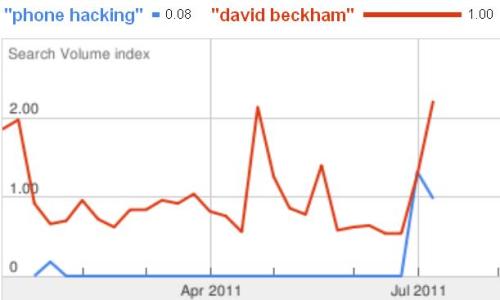 That popular interest lends extra importance and extra impetus to the current debate over the whole News of the World/News International/News Corporation phone hacking scandal. Right now, it is not simply the chattering classes, the Westminster crowd, and people in London newsrooms who care about this—it is a much wider audience, an audience of people who will (because they have lives to live) rarely pause for as much as a moment to consider journalistic ethics, media reform, or the relations between politicians and the press.

As long as that audience is there—and I’m not sure that will last long—the scandal may represent not only enormous damage done to the image of the Murdoch family, their closest associates and the corporate empire they have built, the British politicians who have too often seemed subservient to them, and the police officers who have turned out to be paid by them.

It also represents a real opportunity to reform media regulation and professional practice in the United Kingdom on the basis of something more than the usual suspects arguing things out amongst themselves and thus perhaps begin to address the real crisis of confidence that exist between the British population and institutions ranging from parties to the press.