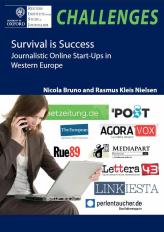 Given all that’s being written about the economic travails of the legacy media industry, it may be surprising—and somewhat depressing—to learn that news media start-ups are struggling too.

But that’s the main finding of a new RISJ Challenge, Survival is Success: Journalistic Online Start-Ups in Western Europe, written by the Italian journalist Nicola Bruno and myself.

Examining nine strategically chosen case studies of journalistic online start-ups from Germany, France, and Italy, we find that the economics of online news are as challenging for new entrants as they are for industry incumbents.

The competition for people’s attention is fierce, and though online advertising is growing rapidly, most of it goes to a small number of US-based giants like Google. This is a tough environment for start-ups, and the track record so far suggests that, as we indicate in the title of our report, survival is a form of success in itself.

Given the structural challenges that new journalistic ventures face, what can they do differently? In my view, one I’ve laid out in a bit more detail in a piece for Reuters Analysis & Opinion, they need to stop irrationally imitating the strategies of the (few) large US-based start-ups, like the Huffington Post, Gawker, and Politico, that many of the people interviewed for the report referred to as inspirations. Strategies that worked for earlier movers operating in a much larger US market are not necessarily going to work for start-ups entering smaller markets at a later point in time.

To survive—and to succeed—journalistic online start-ups in Western Europe need to find their own way, think beyond the dominant, and mostly failing, existing models of news production. I know this is a lot easier to say than it is to do, but it is worth saying anyhow. I wish all the new news entrepreneurs good luck. We need them.

This entry was posted in Business of journalism, Comparative media research, Online journalism. Bookmark the permalink.