Monday February 13, 5pm-6.30pm at the Rothermere American Institute in Oxford. This is the official launch of my book, a talk moderated by Nigel Bowles with Tom Wales serving as a respondent, to be followed by a wine reception. The RAI is an ideal venue for this, first of course because it is the hub of all things American in Oxford, but also because I finished my revisions on the manuscript in their wonderful library. The venue is here.

Tuesday February 21, 5.15pm-6.30pm at the New Political Communications Unit, Royal Holloway, University of London. This event is hosted by Andrew Chadwick whose work I’ve learned much from, so I’m looking forward to discussing the book with him, his colleagues, and the rest of the RHU community. The venue is here.

Wednesday February 22 (time and location TBA) at the Communication and Media Research Institute at the University of Westminster.  My host is Anastasia Kavada, with whom I’ve had many an animated conversation about digital politics and protest at various conferences. It’s my first visit to CAMRI, an internationally famous media and communications department, so I’m sure it will make for very interesting conversation.

More information upcoming on talks in March (in Denmark) and April (in the United States). Stay tuned… 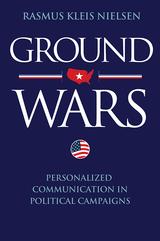 My book Ground Wars: Personalized Communication in Political Campaigns is now officially out. At the most basic level, the book is about the role of people in political communication in the early 21st century.

It has sort of leaked on to Amazon and other sites over the last few weeks, but yesterday was the official publication date and hard copies should now be available.

The book provides a close ethnographic account of how American campaigns have responded to a shifting media environment, the rise of new digital and networked technologies, and a changed political scene by re-inventing what I call “personalized  political communication”—the use of people as media—and are again deploying large teams of staffers, volunteers, and paid part-timers to work the phones and canvass block by block, house by house, voter by voter. You can read the first chapter here. The book is available on Amazon.com and Amazon.co.uk (and I’m sure every decent rail road station kiosk and airport bookstore will have the paperback edition prominently displayed next to James Patterson’s latest…).

I’ll be writing occassionally about the 2012 U.S. elections on this site and on on Politics in Spires on the basis of the issues I analyze in the book, such as personalized contacts, volunteer mobilization, and the targeting of voters.