Just back from Groningen and “The Unlovable Press”, a two-day event with more than forty scholars presenting work that builds on and engages with the work of Michael Schudson, my PhD advisor at Columbia.

I was a proud part of a panel with three other Schudson-Columbia alumni, C.W. Anderson, Julia Sonnevend, and Lucas Graves (the center of attention on the picture below), moderated by Silvio Waisbord, who worked with Michael at UC San Diego. 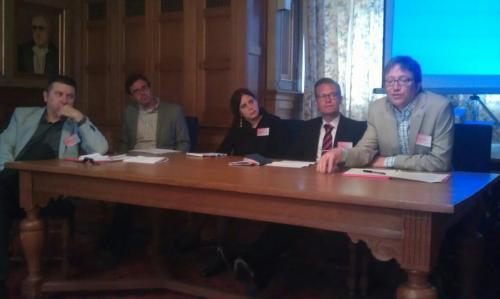 Each of us talked about a piece of Michael’s work that had been particularly important for us, Chris about the Origins of the Ideal of Objectivity in the Professions (parts ofwhich later became Discovering the News), Julia about Watergate and American Memory, Lucas about The Good Citizen, and myself about Why Democracies Need an Unlovable Press.

As so often before, I found it extremely useful to go back and read Michael before taking a stab at staking out a clear position on a big topic—here making the case for a “minimalist approach” to the role of journalism in democracy (outline below).

It was a great event, no doubt slightly uncomfortable for Michael, who never seems entirely at ease when the center of attention, but a real testament to his scholarship, which was also honored by the University of Groningen awarding him an honorary doctorate for his work.

There is a nice video of Michael talking about the “Saving Grace of Journalism” here, made for the occasion. The conference line-up is here.

Our (Anderson/Sonnevend/Graves/Nielsen) panel outline is below.

Panel proposal for “The Unlovable Press: Conversations with Michael Schudson”

In his introduction to The Good Citizen, Michael Schudson analogizes his approach to political history to that of a child learning the game of baseball for the first time. The point, he explains, is to understand past modes of citizenship not through timeless democratic theory, or even long-­‐standing political institutions, but by “directing attention to the instructions of the game itself”: the values and habits and rules, written and unwritten, that have guided everyday citizens today and in the past. This is a characteristic metaphor from a scholar who wears theory lightly but probes deeply into abiding questions of democratic life and culture. And it suggests a fitting approach to understanding the course of Schudson’s own scholarship, and how it fits into in the world of ideas — by setting aside broad labels to try to read the values and concerns reflected in three decades of writing on the media and the public sphere.

What is the “Schudsonian” approach to doing sociology and history? This panel offers four provisional answers to that question, each an attempt to define and then respond to the wider theoretical framework or political commitments one may read in Schudson’s work. The presenters, all former advisees, will organize the discussion as engagements with four key texts from Schudson’s work on the media and politics: his doctoral dissertation, “Origins of the Ideal of Objectivity in the Professions: Studies in the History of American Journalism and American Law, 1830-­‐1940” (originally 1976); Watergate in American Memory: How We Remember, Forget, and Reconstruct the Past (1993); The Good Citizen: A History of American Civic Life (1998); and the essay “Six or Seven Things News Can Do For Democracy,” in Why Democracies Need an Unlovable Press (2008).

These four texts span more than three decades of thinking about the press, politics, and public culture in the United States and more broadly. As entry points along that span they illuminate the range of methodologies and literatures that have informed Schudson’s scholarship — as a sociologist of public institutions, as a social and cultural historian, and as an observer of political life whose views incorporate classically liberal notions as well as the many critiques liberalism has invited. These texts offer a window onto Schudson’s engagement with questions at the center of intellectual inquiry: How should we as citizens and scholars understand the status of objective truth? What is the relationship between individual events and wider social forces, in a day’s news or a nation’s history? And finally, how should we read the long bend of democratic history, and the possibilities it suggests for meaningful action today by citizens, journalists, and scholars?

Schudson as a Sociologist of Knowledge: Revisiting the Origins of Objectivity in Journalism (and Law)

Excavating a doctoral thesis — even a published one — is a dangerous business for both thesis author and archaeological digger. Nevertheless, this paper revisits Schudson’s original doctoral work, “Origins of the Ideal of Objectivity in the Professions: Studies in the History of American Journalism and American Law, 1830-­‐1940,” half of which became Discovering the News. In part drawing on interviews with Schudson, this paper argues that “The Origins of the Ideal of Objectivity” places Schudson more firmly in the sociological tradition and serves as a useful, though occasionally problematic, resource for the current wave of studies on digital expertise.

On the Social Significance of the Statistically Insignificant: Michael Schudson’s Social Theory

In Watergate in American Memory, Michael Schudson argued that the social sciences avoid history, both the exceptional and the small-­‐but-­‐memorable moments of human existence. In contrast, Schudson’s writings carefully observe and somewhat anxiously admire the power of the singular, the earth-­‐shattering as well as minor events in public life. But is it possible to build a social theory dedicated to the “social significance of the statistically insignificant?” This is the central challenge of his scholarship and the topic I will explore in this paper.

The Monitorial Citizen in the Age of Fact-­Checking

In The Good Citizen, Michael Schudson argues that the politics of past eras have to be understood in their own terms — while also painting a picture of broad progress towards a democratic citizenship that is both reasoning and humane. This paper uses Schudson’s “monitorial citizen” to consider recent changes in the media-­‐political world, particularly the rise of professional fact-­‐checking groups. These developments are analyzed in light of two large questions: How does the monitorial citizen fair in a moment of abundant information but little consensus? And, what language does Schudson’s work give us for talking about moments or ways in which things seem to get worse?

The One Thing News Might Just Do for Democracy

In an influential essay in Why Democracies Need an Unlovable Press, Michael Schudson outlines “Six or Seven Things News Can Do for Democracy”. In this paper, I will suggest that Schudson — who is more often attacked by radical democrats and critical theorists for being a timid liberal who demands too little — is in fact far too ambitious. I will argue that journalism, especially in its (in the Western world) increasingly diminished institutional state, can probably do only one truly distinct and important thing for democracy, namely make relatively accurate, accessible, relevant, and timely independently produced diverse information available about public affairs.

This entry was posted in Conferences. Bookmark the permalink.

One response to ““The Unlovable Press” – Schudson goes to Groningen”