Danish discussion of surveillance by NSA and others

Spoke yesterday at a debate hosted by the newspaper Information, the Danish Journalists’ Association, and the IT University about the NSA scandal, including its Danish subsidiary (spying during the COP15 negotiations, a story broken by Information working with Laura Poitras on the basis of documents leaked by Snowden and subsequently covered around the world). 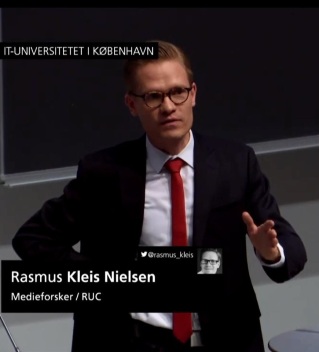 histle-blowers like Snowden and Manning in covering these kinds of stories, but also enabled and empowered by real political debate and popular interest.

This we have in for example Germany, but is all-too-often often absent when the political elite close ranks or some top news organizations chose not to pursue a story.

It was a great event overall with Ewen MacAskill from the Guardian and a host of Danish journalists and others commenting, coinciding of course with the publication of Glenn Greenwald’s book.

Video of the here (all but Ewen MacAskill in Danish), more on Twitter at #nsadk

This entry was posted in Talks and presentations, Uncategorized. Bookmark the permalink.