Hacks and spooks – journalism and the intelligence services

January 11, we launched John Lloyd most recent book “Journalism in an Age of Terror“, which focuses on the relationship between journalists (hacks) and the intelligence services (spooks) across the US, the UK, and France.

I had the pleasure of chairing a discussion of the book at the Institute of Government with a great (if rather male) panel including John, Andrew Dorman (Professor of International Security, Kings College London), Stephen Grey (Security Correspondent, Reuters), and Sir David Omand (former head of GCHQ). 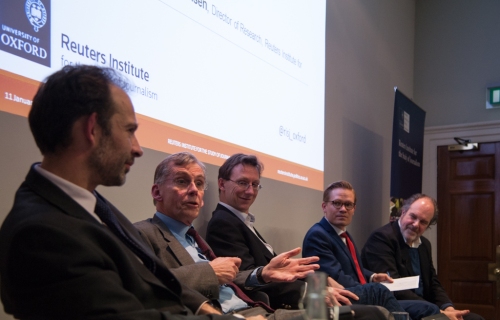 Hacks and spooks are two very different professions, and have for decades viewed each other with suspicion, even enmity, one aiming to publicize and to inform the public, the other necessarily often operating in secrecy and primarily informing government.

And yet they are also in some ways similar, trying to find truth and report it, often in real time, often at least in part on the basis of sifting through many different sources with many different motives (whether journalists’ sources or “comint” for spies).

They are also two professions that are considerably more interested in sharing their findings than being transparent about how they found out. The model is often “this is what we found, trust us”.

In his book, John focus on the central tension between journalists’ ambition to publish, and the secret services ambition to remain, well, secret. As he writes—

The threat of terrorism and the increasing power of terrorist groups have prompted rapid growth of the security services and changes in legislation permitting collection of communications data. This provides journalism with acute dilemmas. The media claims the responsibility of holding power to account: but cannot know more than superficial details about the newly empowered secret services. At the heart of the state are agencies with sweeping powers to legitimately examine private correspondence – which by definition must remain secret.

Chapter one of the book is available for free download here, and John wrote a long article in the Financial Times on President Trump’s approach to both the press and the secret services based in large part on the book that you can find here.

This entry was posted in Talks and presentations. Bookmark the permalink.