Next steps for Romney? 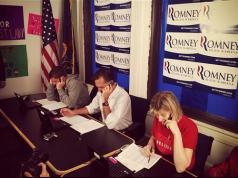 It continues to look like Mitt Romney will be the Republican candidate for President in the fall. While he is still fighting a war of attrition with Rick Santorum, it will take a major game changer for him to lose the primary. So it is no surprise that he is increasingly orienting himself towards the general election.

What can the course of the campaign so far tell us about the challenges Romney will face and how he will try to tackle them?

The drawn-out primary has been a mixed blessing, forcing Romney to cater to a conservative base out of touch with many Americans, forcing him to spent time and money battling right-wing rivals when he would have preferred to train his guns on President Obama. It has also exposed some issues that Romney and his campaign will have to content with moving forward.

In short, Republicans aren’t really fired up about their likely Presidential candidate, and some may not be bothered to vote for him. This is a problem in what may very well be a very close race.

Moving to the general election, Romney has to make his pitch to independent voters, but also do his utmost to build a platform and an organization that can help him bring out the conservative base. If there is one thing Karl Rove taught us about American politics, it is that you cannot and should not take the base for granted, but actively cater to it and work to bring it out (his so-called “base-strategy”). The idea that simply not being Obama will do this for Romney is dangerous. The President is certainly not popular on the right, but Romney will need to fight for every vote, conservative or independent, to win in the fall.

Romney’s well-funded and professionally managed campaign organization has been highlighted as one of his advantages throughout the primary. As he begins to re-tool for the general election (while still dealing with Santorum et al at the same time), it will need to expand its presence on the ground and built a network of active supporters in all the potential battleground states. A proper field operation capable of getting out the vote is hard to put together on short notice. It takes time and effort to cultivate the relationships that animate a good ground game.

One of the advantages of the fiercely fought 2008 Democratic primary was that it left Obama with an organizational presence and strong supporter base across the country that also helped him fight and win the general election. In contrast, it is not clear that the Romney campaign has managed to maintain its presence even in states where it won the GOP primary. As Ed Pilkington and Amanda Michel from the Guardian writes—

Romney until recently had three offices in Florida, all directed to his primary battle against Santorum, Newt Gingrich and Ron Paul. Yet despite the fact that no Republican has won the White House while losing Florida since Calvin Coolidge in 1924, Romney closed all three offices after the January 31 primary.

Calls to the main number of Romney’s Florida headquarters are sent to voicemail; the mailbox is full and will not accept further messages.

For all the talk about inevitability, it seems the Romney campaign is still mostly oriented towards winning the next primary states and has only just begun re-tooling for the general election. (I haven’t been able to find information on whether they remain active on the ground in Ohio and Virginia, it would be interesting to know.)

If they want to build an organization capable of fighting Obama for every inch in every contested state, they will need to maintain and continually expand a presence on the ground across the country. At the moment, they do not seem to be doing this. Come November, they may find there is a price to be paid for that.

My book, Ground Wars: Personalized Communication in Political Campaigns, deals with how American political campaigns mobilize, organize, and target their field operations, using large numbers of volunteers and paid part-timer workers to contact voters at home at the door or over the phone. It has just been published by Princeton University Press and is available on Amazon.

(cross-posted to Politics in Spires)

This entry was posted in 2012 Republican primaries, 2012 US elections, Ground wars, Political campaigns. Bookmark the permalink.

One response to “Next steps for Romney?”