What We Don’t Know About the Business of Digital Journalism

“The Story So Far”, an interesting new report by Bill Grueskin, Ava Seave, and Lucas Graves published by the Tow Center for Digital Journalism at the Columbia Journalism School, presents a great tour d’horizon of the business of online news in the U.S. I’d warmly recommend reading it, it is well-written and wide-ranging, and deals with a whole host of important question facing the commercial media organizations that are such important parts of most national media systems and, despite their decline in recent years, continue to fund most accountability journalism around the world.

The report’s treatment of the increasingly explicit link between the cost of reporting, the traffic it attracts, and the revenue it generates will be rather chilling reading for many journalists and editors (see chapter nine). A concrete example: I spent a couple of hours reading the report, and a couple more writing this–even if we place the result in the lowest-ranking category used by AOL for “revenue managment”, this post would still have to generate 7,000 page views to be worth commissioning for $25. Let’s just say it is a good thing I have other incentives.

The subtitle of the report is “What We Know About the Business of Digital Journalism”, with the proviso inserted in the introduction, that the study is restricted “mostly to the U.S. market.” “Entirely” would be more precise here, and that is a problem, not only for the international reader, but also for people who want to understand the situation in the U.S.

The thing is that we know an awful lot more about developments in the business of journalism, digital and analogue, in the U.S. than anywhere else, and that much of the conversation around the future of journalism remains focused on what takes place in the states—in the U.S. because this is understandably the main concern and because most of those taking part in the conversation do not seem to know much about how things are done elsewhere, in other countries, because comparative conversations are all too often limited to “us vs. the U.S.” and rarely expanded into more meaningful cross-national discussions of countries with similar size markets, market structures, and historical legacies.

This is not Grueskin, Seave, and Graves’ fault, and it takes nothing away from the valuable work they have done in researching and writing this report. But the dearth of comparative analysis is constraining both intellectual attempts to understand what is going on, and arguably also the ability of industry people and policymakers to make informed decisions about how to react to current changes in the industry. As the great comparativist Seymore Martin Lipset wrote in his book American Exceptionalism, “to know only one country is to know no country”–a point I’ve reiterated elsewhere.

In many ways, the American experience is exceptional, and one should be careful in understanding developments elsewhere through this lens. Let me give just three examples of factors rightly highlighted by Grueskin, Seave, and Graves as important in understanding the development of digital journalism in the U.S., and illustrate how things look different in much of Western Europe.

“Even before the Internet, subscription revenue didn’t amount to much for most news organizations,” the authors write. This is true in the U.S., but certainly not in much of Northern Europe, where home-delivered subscriptions have been an important, often dominant, form of newspaper use, and where the revenues generated have been very considerable. Consider the national differences illustrated by the following figure, taken from The Changing Business of Journalism and its Implications for Democracy, a book I co-edited with David Levy.

Many European newspaper readers have had a different relationship with their newspaper than their American counterparts, a relationship built on (often quite expensive) subscriptions and long-term loyalty.

More comparative research might help us understand whether this historical legacy can help them build different models as they move to online and mobile platforms, and whether it means people perceive the issue of online payments differently.

Grueskin, Seave, and Graves also explain why American newspaper came to be so dependent on advertisements: “The monopoly or oligopoly that most metropolitan news organizations enjoyed by the last quarter of the 20th Century meant they could charge high rates to advertisers, even if their audiences had shrunk.”

I live in Oxford in the United Kingdom, which is in most respects far from an ordinary place, but can serve as an illustration here: this town of about 150,000 people is served not only by the local Oxford Mail (6 days a week) and Oxford Times (weekly), plus various local advertising freesheets, but also by the whole range of nationally distributed British papers—The Sun, the Daily Mail, the Daily Mirror, The Daily Telegraph, The Daily Express, The Times, the Financial Times, the Guardian, the Independent, and the newly-launched compact title simply called the i. And no doubt several titles more that I’ve forgotten here. Most of these offer subscriptions for Oxford residents. All of them are available at newsstands.

The upshot of this is that many European media markets have historically been more competitive than their American counterparts at the national level, and the news organizations that operate in them have been more used to dealing with competition than their American counterparts. The Oxford Eagle published in Oxford, Mississippi (U.S.) does not need to worry all that much about print competition. The Oxford Mail published in Oxford, Oxfordshire (UK), has had to content with numerous other print titles for decades.

Again, more comparative research is needed to help us understand if this legacy makes any difference in how news organizations compete for audience attention and advertising revenues and how they try to stay relevant to their readers.

I suspect the report’s chapter on paywalls will be read with particular interest, for the obvious reason that everyone in the news industry wants to know if it is indeed feasible to charge for general interest news online and on mobile platforms.

As the authors rightly point out, the track record in the U.S. (and elsewhere) is less than inspiring so far. While the Wall Street Journal and the Financial Times remain well-known exceptions, few newspapers have built significant revenue streams from online sales. The decision to make content available for free online (to market the print product and in the hope that audiences and advertising revenues would eventually grow to cover costs) is now widely seen as the “original sin” of the business of digital journalism.

While the free model certainly does seem to be dominant not only in the U.S., but also around the Western world and beyond, here too more comparative research might help us understand developments in the business of digital journalism.

To take just one example from my native region, Scandinavia—the Swedish tabloid Aftonbladet, which has the highest print circulation in the country (over 300,000 copies), has for years operated a system by which most basic breaking news is free, but where people need to sign up for a special online premium subscription to get access to long-form and unique content on the website. In 2010, the newspaper reported that 115,000 people paid about $4.5 a month for this (several more specialized and more expensive subscriptions are also offered for people interested in particular topics)–see more in English here.

If the self-reported figures are reliable, this should generate north of $6 million a year in sales revenues—not a fortune, but not trivial either. Has this drastically undermined the total audience of Aftonbladet.se, and thus its ability to be “part of the conversation” and generate online advertising revenues? 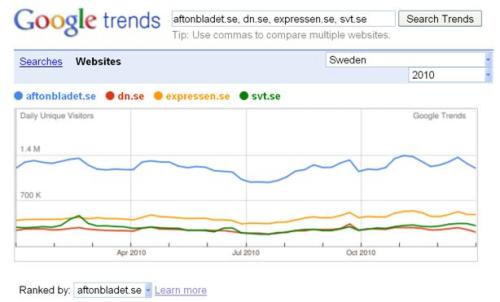 Not if one compares daily unique visitors to the second and third-most circulated Swedish newspapers, the broadsheet Dagens Nyheter (dn.se) and the tabloid Expressen (ds.se) or to the public service television broadcaster Sverige Television (svt.se), as can be seen from the above Google Trends graph—Aftonbladet is, despite having charged for premium content for years, by far the most popular news website in Sweden, a country that has a quite competitive national media market with several newspaper titles, a well-funded public service broadcaster, and several commercial television channels.

According to a press release from Schibsted (the Norwegian media conglomerate that owns 91% of Aftonbladet), the newspaper generated almost 20% of its revenues from online operations in 2010. This is in itself an impressive figure, and even more promising because a growing part of this comes from online sales.

How does Aftonbladet, which is neither particularly specialized nor particularly localized, get away with this model (which is increasingly being replicated by others, like the Danish broadsheet Berlingske)? Nobody knows for sure, but again, more comparative research beyond the exceptional case of the U.S. should help us understand what is going on.

None of this—the international variations in the historical importance of sales and subscription revenues, in how competitive newspaper markets in particular have been, and in how news organizations have tried to monetize content online—take anything away from the value of the Grueskin, Seave, and Graves report.

But it all underlines that “The Story So Far” is an American story, and that there is a lot we still don’t know about the business of digital journalism, including how the spread of new digital information and communication technologies impacts commercial news organizations with different historically inherited business models, operating in different contexts, and who have pursued different online strategies.

These are important questions, not only for the journalists and others directly impacted by the upheaval of the news industry, but for all citizens in the democracies that have developed hand-in-hand with the mass media for the better parts of a century, and thus also for social scientists who have an obligation to understand what is an ongoing and potentially profound transformation in how we govern ourselves.

Full disclosure: I graduated from the Columbia Journalism School, and Lucas Graves is a good friend.

This entry was posted in Uncategorized. Bookmark the permalink.